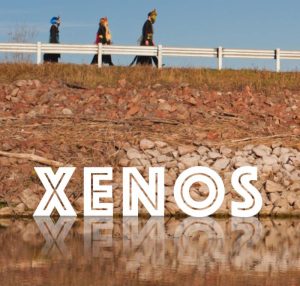 Last June, the Rural Arts and Culture Summit, featured Dana Johnson, an Upper Midwest Emmy Award winning filmmaker and producer at Pioneer Public Television in Appleton, MN in a plenary session about art and culture and the rural narrative.

This October 8th at 4pm, in collaboration with Pioneer Public Television, they are excited to resume a conversation with Dana, and to invite everyone to participate in an exclusive online screening and discussion of her film, Xenos, which was recently featured at the Portland Film Festival and has been nominated for an Upper Midwest Emmy Award.

In Xenos, a group of aliens come to a rural town and are greeted with hostility by some of the local residents. The film provokes important questions about being a newcomer in a small town, protecting a community’s identity and traditions, and the masks we wear to conceal our inner identity.

Using the dynamic online platform OVEE, they will screen the 10 minute film online, followed by a live-streamed, in-studio discussion with Dana and two panelists, Sheri Booms Holm (West Central Initiative) and Bethany Lacktorin (sound artist & performer). Participants will be able to make comments or ask questions in real time throughout both the screening and discussion.

2011 SMAC grant recipient Samuel Hathaway of Montevideo has a new film premiering at the Twin Cities Film Fest on Saturday, October 24 at 2:15 pm. Made with an all-Minnesota cast and crew, the film is titled, The Old, Old Story. Find out more about the film and the festival at www.twincitesfilmfest.org.