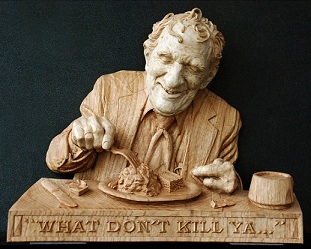 Four carvings by Fred Cogelow of Willmar will be featured in “Made in Minnesota,” an exhibition “surveying and celebrating the diverse practice” in the state’s contemporary sculpture at the University of Minnesota.  The show will run January 21 through February 15, 2014 at the Katherine E. Nash Gallery in the Regis Center for Art, 405 21st Ave South on the West Bank Campus in Minneapolis.  The show has been curated by Wayne Potratz, Professor of Sculpture and Gallery Director, Howard Oransky.

“As an anachronism made incarnate,” Cogelow says, “I deem it an honor to be perhaps the most traditional of the twenty-one sculptors included in the showing.”   His selected works include three of the mezzo-relief portraits for which he is best known.