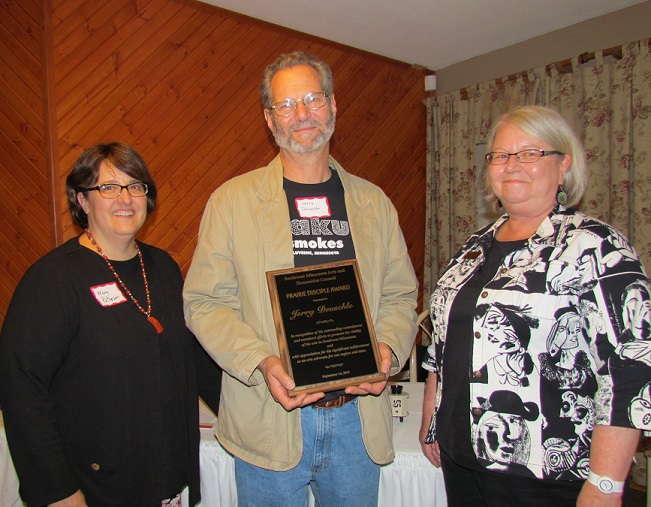 The Southwest Minnesota Arts Council is pleased to announce Jerry Deuschle of Luverne as the recipient of the 2013 Prairie Disciple Award, which acknowledges a person who has been instrumental in promoting the arts in the 18-county area of southwestern Minnesota.

Nominator Mary Petersen of Luverne describes Deuschle as “the area’s go-to person for help in getting a project going.  I   recall when Jerry had an ad in the Rock County Star Herald asking for people interested in the visual arts to call him. This effort got the ball rolling in starting the Rock County Fine Arts Association.”  Since its founding in 1992, Deuschle has served as the president and gallery curator of the Rock County Fine Arts Association (RCFAA), which is responsible for art shows at the Carnegie Cultural Center, Art Rocks! (a summer arts festival), and an annual Holiday Studio Tour.

Petersen continues, “Jerry also played a major role in securing the former Rock County Library for the Carnegie Cultural Center, where RCFAA could have a gallery to introduce people to art from near and far. Jerry pounded the pavement to get donations that funded remodeling such as putting in track lighting and making display panels. Many hours were donated by Jerry whose trade as an electrician found him doing the wiring and installing the lights. This building now serves as an art gallery as well as a meeting place for several arts organizations such as Council for Arts and Humanities of Rock County, Blue Mound Woodcarvers, Rock County Fine Arts Association, as well as the box office for Green Earth Players.”

Deuschle also serves on the Council for the Arts and Humanities in Rock County (CAHRC).  Fellow board member Linda Dummer says, “I have seen firsthand the enthusiasm ideas, dedication, and commitment he brings to a board.  Jerry attends regional and state events to learn what is being done in other parts of Minnesota and to share what we are doing in our community.”

Janine Papik, who works with Deuschle on the Design Committee for Public Art (part of LIFT – Luverne Initiative for Tomorrow), was grateful to be encouraged by Deuschle to attend a Public Arts Commission meeting in Willmar.  “It was a whole new world to us, and made us realize what effort it takes on the part of many individuals to get the arts into our communities, and to continue doing this for the benefit of all. There’s no doubt that the arts community in Luverne would not be where they are today without all the support, work, vision, time and energy given by Jerry.”

Cindy Reverts describes Deuschle’s work with Raku Madness, an annual raku pottery demonstration and workshop in Luverne:  “Jerry started our Raku Madness weekend 20 years ago.  He is responsible for organizing the event, scheduling the artists and seminars, as well as hosting the event at his gallery and studio for the last several years.  He has gotten many national artists to be presenters, giving local artists and the public exposure to people they would probably never be able to interact with otherwise.”

“I have observed Jerry’s promotion of the arts and of individual artists over the years and can attest to the many artists he has encouraged to continue their work and to display it for the public.  His encouragement has brought many artists together to share and learn with each other, and the community has seen many benefits from the group of artists who call Rock County home,” says Nan Karr Kaufenberg of Redwood Falls.

Deuschle has also served two terms on the SMAC board of directors, has served as a SMAHC grant review panelist, and has attended Arts Advocacy Day at the State Capital several years.  He also participates in the Green Earth Players’ theatre productions as both an actor and an electrician.

Deuschle grew up in Luverne and received an MS degree in art education from Mankato State University.  After teaching public school art in Appleton and Arlington, MN, he returned to Luverne to work in his father’s electrical business, Harold’s Electric, which he now owns.  In addition, Deuschle is currently an instructor at Minnesota West Community and Technical College (Jackson campus), teaching in the ceramics and construction electrician programs.  He has taught local community education art classes and has served as a juror for Minnesota High School League and Minnesota West student art shows. Deuschle is also co-owner of Deuschle Studio with his wife Kathy, also an artist.  They have two sons and three grandchildren.