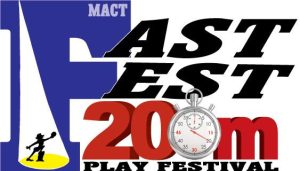 The festival kicks off with a Friday night welcome party at the Pipestone Performing Arts Center.  On Saturday, performances (and possible workshops) continue throughout the day and evening, followed by a networking opportunity.

Fast Fest is open to community theatres, high school and college theatre programs, and ad hoc groups.  Each performance will have 5 minutes to setup, 20 minutes to perform, and 5 minutes to strike.  A table and four chairs are provided.  Performing companies can bring in one additional set piece and costumes and props as needed.  There will be a short, moderator-led colloquy after each performance.