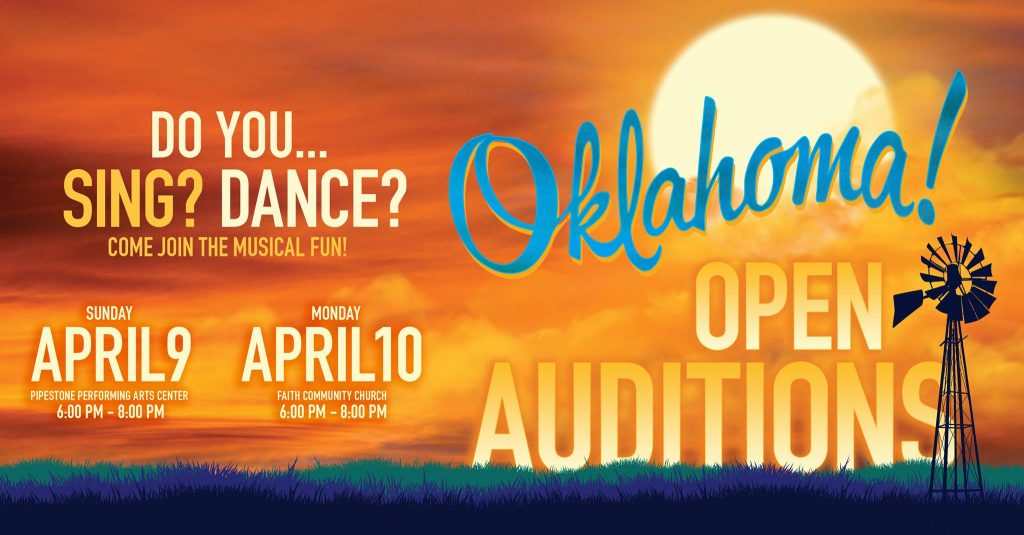 Message from Calumet Players of Pipestone:

WANTED!! men women and children ages 8 to 102 to join the cast of Oklahoma.

Rodgers & Hammerstein’s first collaboration remains, in many ways, their most innovative, having set the standards and established the rules of musical theatre still being followed today. Set in a Western Indian territory just after the turn of the century, the high-spirited rivalry between the local farmers and cowboys provides the colorful background against which Curly, a handsome cowboy, and Laurey, a winsome farm girl, play out their love story. Although the road to true love never runs smooth, with these two headstrong romantics holding the reins, love’s journey is as bumpy as a surrey ride down a country road. That they will succeed in making a new life together we have no doubt, and that this new life will begin in a brand-new state provides the ultimate climax to the triumphant OKLAHOMA!

There not very many things that are as American as Apple Pie and Hot Dogs, but we believe that Oklahoma is. It was the first musical to ever be selected to be on a USPS stamp and the song Oklahoma was declared the be the official anthem for the state of Oklahoma. It also won an international Emmy and best musical of the century award. That is why the Calumet Players is we chose to perform Rodgers and Hammerstein’s first ever collective musical ”Oklahoma”. It is a story of early American life, love, dreams and nightmares.

There will be something for everyone, whether you sing, dance or not come join our cast. Learn fun dance steps of a simple country life and be a part of the story as love and territory intertwine on the stage. Or join in on the dream ballet that transforms the stage visually to what you can only imagine in your dreams.

Music for auditions will be available at the Pipestone Library for you to practice with to come prepared. There will be a choice for men, women and youth/children. The audition process will entail, singing and reading for the directors. There is a place and part everyone that comes out! We hope to see there!!