Performance artist Bethany Lacktorin, in partnership with New London Little Theatre presents performances specifically designed for an audience of one (or two). Inspired by previous projects created while working as a sound engineer in Prague, as well as the limitations of COVID-19 social distancing guidelines, Bethany explains, “in the same way you would make an appointment with your salon or therapist, these performances would be by appointment only and offered for an extended period of time.” Photos courtesy of the Crow River Players/Little Theatre. Little Theatre’s summer series, “Art by Appointment” opened this week with the first of three original features: The Museum of Portable Sound. Visitors can book a 40 minute appointment to view the museum’s rotating ‘Physical Objects’ collection then meet with host and curator, John Kannenberg for a guided tour of the ‘Permanent Sound’ collection.

Described as a virtual museum experience, visitors will be guided through an imaginary four-floor gallery housing hundreds of audio recordings including historical sound bytes, obscure ritualistic chants, natural white noise, music and, of course, organic sounds from New London. Simply put, those who book their 40-minute appointment will be led into the theatre by a museum host and a museum map, and seated before a computer where they meet museum curator and project brainchild John Kannenberg.

Kannenberg, who holds a doctorate of Philosophy at the London College of Communication, (University of the Arts London) works with sound as objects of culture and curatorial care. For this project Kannenberg guides each visitor, live from his home in Portsmouth, U.K., through any of the 30 galleries of their choosing. 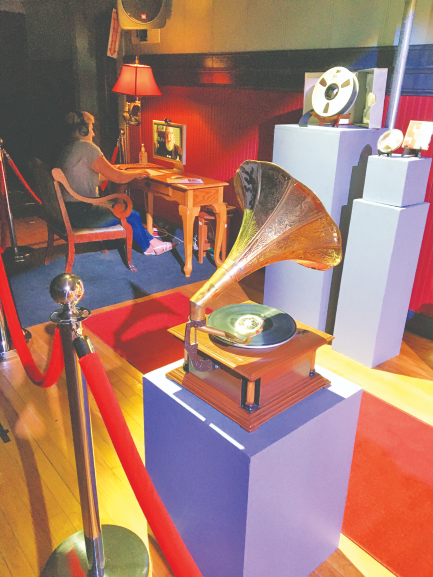 Photo courtesy of the Museum of Portable Sound. Dr. John Kannenberg, an expert in philosophy, curation and “sound as objects of culture,” will serve as host and curator of the “Museum of Portable Sound.” Slated to begin in July at the New London Little Theatre, the exhibit guides visitors on an auditory tour of a four-floor acoustic “museum” dedicated to all manner of noise, ranging from the first recorded human voice to the flush of Sigmund Freud’s toilet.

With over eight and a half hours of audio to select from – some recorded by Kannenberg himself such as the winds blowing from the Pyramids of Giza, and others like the first recording of the human voice available through public domain –  there’s sure to be at least one sound that resonates with each visitor.

Care to chuckle with a pink  river dolphin in the Amazon River? Stop at Gallery 4 on the first floor – Natural History. Later, you can cool off to the soothing sounds of Sigmund Freud’s toilet flushing in his home in Vienna (Gallery 17 in the Architecture & Urban Design section.) If you’re in the mood for listening to lost relics, visit the Arts and Culture floor and while away the day strolling through the ancient catacombs beneath Alexandria, Egypt, or gathering in a crowd to hear the final chimes of Big Ben before its four years of silence.Slated to begin accepting appointments in September, “A Gift from New London, is a collaboration with longtime art partner, Cristina Maldonado. This interactive art “encounter” draws from the idea of building dialogue through non-verbal communication.The most ambitious of the three Art by Appointment projects, “A Mill Pond Sound Walk” plans to book appointments early October . Similar to the Museum of Portable Sound, the sound walk heavily utilizes audio as a storytelling device. Unlike the museum, however, the sound walk is a theatrical experience. Taking a page from Oliver Sacks’ novel, “The Man Who Mistook His Wife for a Hat,” which catalogues a series of peculiar neurological disorders, some portions of the performance play with the idea of “reminiscence.” The three performances will run cumulatively, ultimately creating a ‘menu’ of performances to choose from.

To book your appointment visit newlondonlittletheatre.org.

Children under 16 must be accompanied by an adult. For health and safety reasons we ask that each individual brings their own headphones or earbuds.
—
Art by Appointment  is supported in part by an Artplace America Grant, The City of New London, SMAC and New London Little Theatre.