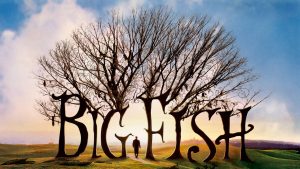 Dress comfortably because you will be dancing.

Also bring your tap shoes if you have them.

The following are the roles that are available to audition for:

Edward – older man (father and beyond, actor ages 35-60). Edward is a charming, charismatic storyteller. A devoted yet absent father nearing the end of his life and wanting to reconnect with his son. He is comfortable in his own skin, but hopes for Will’s approval. He absolutely loves his wife, his son, and telling stories. Needs a big voice and serious character acting. Plays ages ranging from young father to older sick man. Able to move but little real dance.

Young Edward – young man (everything before fatherhood, actor age 18-30). Young Edward is an enthusiastic, optimistic, energetic romantic. He needs to steal our hearts and make us buy into the fabulous myths that he enters. He is the quintessential hometown boy hero. Needs a big voice. Plays ages ranging from high school to late 20s/ early 30s. Very good mover .

Sandra – older woman (married and beyond, actor ages 25-55). Sandra is patient, calm – the perfect balance to Edwards enthusiasm. She adores and appreciates Edward and tries to bring reconciliation to her husband and son, both of whom she loves. Needs a mellow ballad voice. Very little movement.

Will – adult (All but little boy, actor ages 20-30). Will is a critical part of the story. He is an earnest, serious, thoughtful young man wanting to reconnect with his storytelling father, but unable to appreciate Edward’s romantic view of life. He is a successful professional and new husband. He has to able to take us on the journey of understanding and make us believe the complex relationship and final heartfelt embrace of his father’s legacy. Needs a strong tenor voice. No dance. Serious character acting.

Josephine – (actor ages 18-30). Will’s wife. Successful adult, sweet, intelligent, and organically compatible with Will. Josephine acts as the bridge between Edward and Will, explaining the deeper meaning of the stories. Often on stage. No singing. No dance. Serious character acting.

Karl – the Giant. (actor ages 18-40). Edward’s best friend. Karl is shy, exceptionally intelligent, hermitlike, and has a quiet charisma. He needs a booming voice and large personality. Needs to be decently tall, but not a “giant.” Bass voice. Ability to walk on stilts.

Amos – adult male, circus owner (actor ages 30-50). Amos is the rather eccentric, quirky owner of the circus that employs young Edward. He also happens to be a werewolf (in Edward’s tales). Needs an actor able to portray strong, outgoing personality and humor. Sings, but not necessarily great voice. Doesn’t need to move, but good stage presence essential. Character voice.

Adult Jenny Hill – adult (maybe same actress as young Jenny). Very tired, disillusioned version of the younger Jenny. She has dignity and honesty. She is crucial in helping Will understand Edward and Edward’s motivations. No movement, but serious acting needed. Also included in ensemble.

Ensemble — Assorted ages, age 14 and older. All sing and move. Some individuals will do extensive dance, but not all.

If you have any questions about auditions, please contact our Executive Director at zack@thebarntheatre.com or 320.235.9500