Leo Dangel was awarded the SMAC Prairie Star Award in 1997 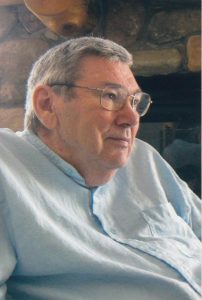 On-line condolences may be sent at: www.opsahl-kostelfuneralhome.com.

Leo was born August 7, 1941 in Freeman, SD to John and Sylvia (Andersen) Dangel. He is the youngest in the family with five sisters. Leo grew up on a farm south of Freeman, SD and was baptized and confirmed at St. Boniface Catholic Church in rural Freeman, SD. He attended a country school in Turner County and Saint Mary’s High School in Salem, SD. He attended Saint Mary’s College in Winona, MN as a seminarian and left after two years, returning to the farm. In the summer of 1961, his life changed completely when he was seriously injured in a car accident, resulting in a spinal cord injury that left him permanently paralyzed and in need of a wheelchair. After two years of rehabilitation, he attended Augustana College in Sioux Falls, SD for one year and then enrolled at Emporia State University in Emporia, KS, where he received a Bachelor of Arts and a Master of Arts in English. In 1968, he began teaching writing and literature full time in the English Department at Southwest Minnesota State University in Marshall, a position he held for twenty-five years. While teaching at SMSU, he became a poet and continued writing poetry for the rest of his life. His poems, which usually portray Midwest farm life, have appeared in many journals and anthologies. He has five books of poems and has won a Nebraska Book Award. The Lyric Theater of Minneapolis made a selection of Leo Dangel poems in a play, “Old Man Brunner County”, which has undergone several revival performances. He retired from teaching in 1993 as a professor emeritus, and the Leo Dangel Creative Writing and Literature Scholarship at SMSU was named in his honor. In 1997, Leo Dangel won the SMAC (then SMAHC) Prairie Star award.

In 20014 Leo moved from Marshall, MN, to an apartment at Majestic Bluffs in Yankton, SD and to Sister James Care Center in 2008.

Leo was preceded in death by his parents, brothers-in-law, Robert Slowey and Arthur Schramm.