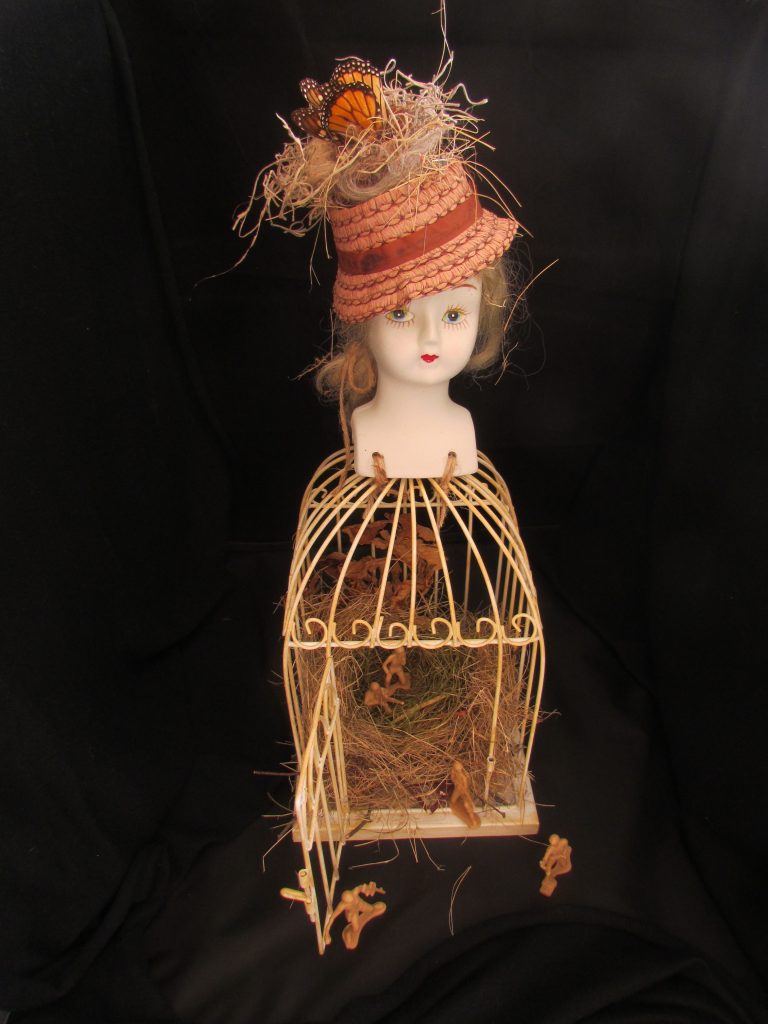 The Other Face of War.

*Artist Reception: Join us on Thursday, July 20, 2017 from 5-7 pm, where Edie will do a reading of her poetry and a short chapter from her novel.

Edie Barrett of Ortonville will exhibit her nest sculptures and large canvas painted photography at the SW MN Arts Council gallery from July 3 through August 25, 2017. Here is how Edie describes herself:

“Edie Barrett is a fifth generation Minnesota Norwegian. She was a North Dakota State University student and then transferred into the University of California Santa Barbara. She remained in Santa Barbara, California, for twenty-six years, then returned to Minnesota in 2010. Edie now lives in Ortonville where she enjoys a quiet and inspired life on the Prairie. She is both a fine artist and a writer of fiction and nonfiction. In California, she performed her work on stage. Her jewelry designs were carried in a shop on Coast Village Road in Montecito, her nest sculptures were carried in a gallery in Carpinteria. Since returning to Minnesota, The Star Tribune has published her articles about life on the Prairie. She has written various articles for The Independent and The Northern Star, Ortonville’s regional newspapers. She is also a published poet. This year, in 2017, she finished both a novel and a film script.

“Edie Barrett has received two grants through SMAC. The first was to purchase Lucite boxes to exhibit her delicate nest sculptures and framing for her large canvas painted photography. Her second, and current grant, is focused on writing: editing support for her novel and submission funds for the film script for national and international film festivals.

“Edie Barrett’s artistic life has emerged in partnership with ecological and social awareness and responsibility. It is not possible for her to compartmentalize these, nor would she want to. She perceives art as a vehicle of self-exploration and is fascinated by the intersection of art and activism. According to Edie, “If we
are receptive to an artistic experience, this allows us to step outside the realm of logical thought, which tends to be linear. When we surrender ourselves to be altered visually and/or auditorily through nature and art forms, we step into the spiral of imagination. It is in this specific hallowed ground that transformation occurs.”

“All of her artistic expressions reflect an authentic process of her individuation, an exploration of her creativity, and her commitment to “Other.” Other being defined as a responsibility to ecological issues, and a mindful, conscious interaction with each other: striving to respect diversity of thought, religion, and culture. Said another way, it is her hope to live a life of considerate conduct, and “play well” in the world. It is her personal goal to contribute intellectually, spiritually, and artistically to her community, the Western region of Minnesota, the state of Minnesota, and to a larger audience.

“Edie is a lifelong artist with writing quickly following. For the past twenty years she has been studying and exploring Jungian psychology. This perspective has had a profound impact in both her life and her creative expression. Six years ago she started a dream analysis group in Ortonville, which continues today with shared leadership. She is a brochure artist in The Meander, The Upper Minnesota River Art Crawl, which happens every October. She is also a supporter and advocate of the arts. Edie is a board member of Big Stone Arts as well as being the proprietor of The GuestHouse, a vacation rental in Ortonville, which is also a regional art gallery.”

We hope that you will join us for Edie Barrett’s reception on Thursday, July 20 from 5 to 7 pm. Edie will do a reading of her poetry and plans to read a short chapter from her novel.