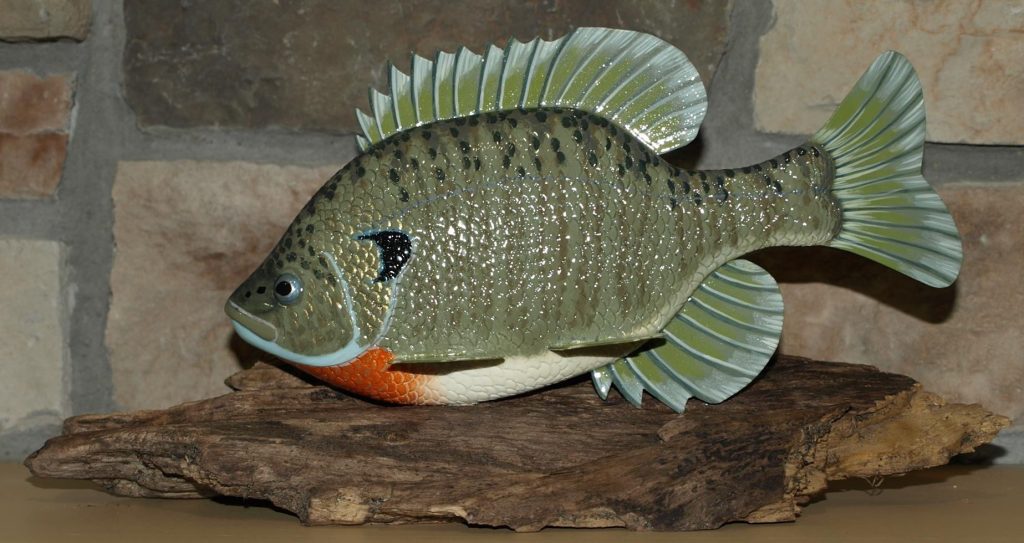 Decoy art by Curt Soine of Granite Falls will be on display in the Southwest Minnesota Arts Council Gallery from January 12 through February 24, 2017. Curt has been carving and painting for over 30 years and is now retired from a career with UPS, which he says enables him to focus more on his art.
Curt received an Individual Artist Development grant in 2014 for attending a workshop throughout 2014-2015 to learn oil painting techniques for the decoys he carves himself. After carving the pieces, Curt traveled to the Krausman’s Woodcarving Studio in Gwinn, Michigan for a 6 day course from Keith Mueller on painting the carvings with oil paints. Curt had previously only painted with acrylic, but felt oils would allow for enriching his abilities and range of techniques.
Before this class Curt says he gained knowledge for painting and carving by relying on books and the advice of other decoy carvers, as well as attending the National Fish Decoy Association’s Minnesota competition in Perham for the last decade and being a member of the Minnesota Decoy and Wildfowl Carving Club shortly after. Curt has also attended other shorter instruction classes before the more extensive
trip to the Kausma’s Woodcarving Studio.
Curt regularly displays, sells, and enters competitions with his decoy art. He has won a number of “Best of Shows,” been published multiple times, exhibited at multiple galleries, had several local arts council shows and has had experience being an Artist in Residence. Rodney Osvold, an original founder of the National Fish Decoy Association, says that Curt’s skills improve every year and that he is “well on his way to becoming one of the top Master Carvers in MN.” Curt has also been a featured artist in The Meander Upper MN Valley Art Crawl since 2007. Recently Curt was named the 2016 Carver of the Year at the Rudy Zwieg Decoy and Sporting Collectible Show in Alexandria.
Doug Lodermeier Sr., published author, designer and book designer, was so impressed by Curt and his wide range of talents and interests in decoy art that he featured him in his book, “Minnesota Duck Decoys - Yesterday’s & Today’s Folk Artists.” Doug says he was impressed not only by Curt’s skill but “his interest in the history and contributions in carrying on and preserving some of America’s truest forms of folk art.”