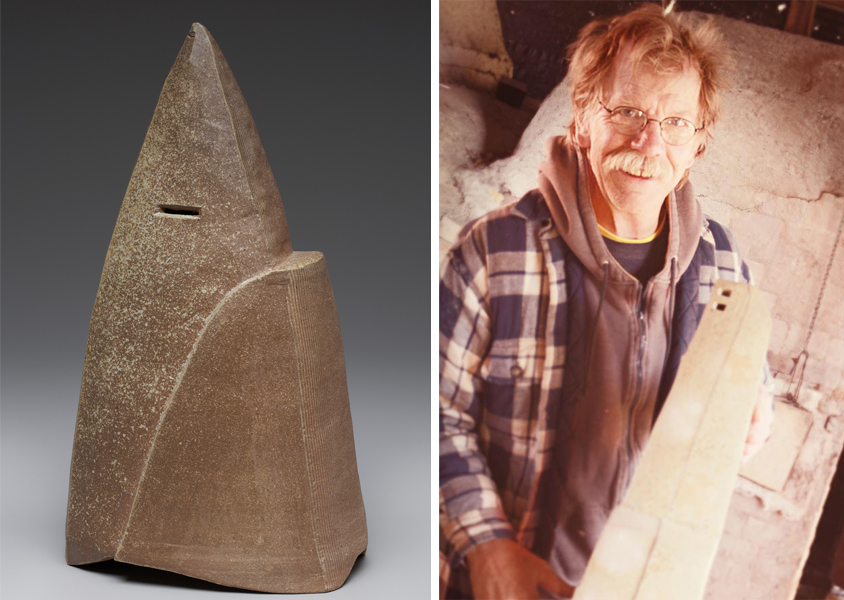 "My idea with this work is to try and convey a sensation of observing something old and weathered. The forms are a departure from my functional work of the past four decades. Though I cannot completely cut the strings from the vessel shape, I find it as a release from the constraints of the wheel and expectations of the function of form.
Ironically enough all the work started on the wheel. The thrown forms were then altered and cut and reassembled. I want to have the work look as if it was naturally made.
I hope and expect the viewer to find more in the work than I do." ~ Bill Gossman
-------
Gossman studied at Mankato State and at River Falls State (WI). After setting up his own studio first in River Falls, WI and then in Minneapolis, MN, while also working as a
production pottery thrower at John Coiner Pottery, Gossman moved to Denmark. Aside from a several-year-long trip to Swaziland, Africa to help establish a studio/workshop with Canadian potter Kirk Creed, he spent the years 1979 through 1990 in Denmark making a variety of pottery in his own and other workshops.
Returning to Minnesota in 1990, Gossman settled in New London to start up his current studio. He is also an adjunct instructor at Ridgewater Community College in Willmar, teaches all levels of pottery classes through community education, and does residencies and workshops around Minnesota and Wisconsin.
Gossman has had solo shows in Denmark and around Minnesota, and has received multiple career artist grants from SMAC over the years. He was the recipient of the SMAC Prairie Star Award in 2010.