The SMAC Board of Directors gives prestigious award 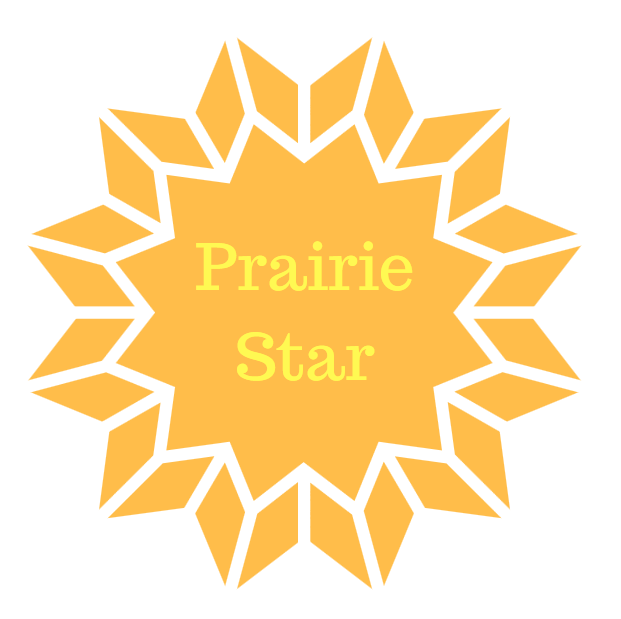 The Southwest Minnesota Arts Council is pleased to announce Travis Erickson as the recipient of the 2018 Prairie Star Award, an award which is given out every other year. The Prairie Star Award acknowledges a person whose body of work best exemplifies the highest quality of art in the 18 counties of the SMAC region. Travis is a fourth generation Dakota pipestone carver and quarrier who has been honing his artistic skills in this medium for nearly 40 years; he started at 10 years old. He currently works at the Pipestone National Monument as a demonstrator for the Pipestone Indian Shrine Association. 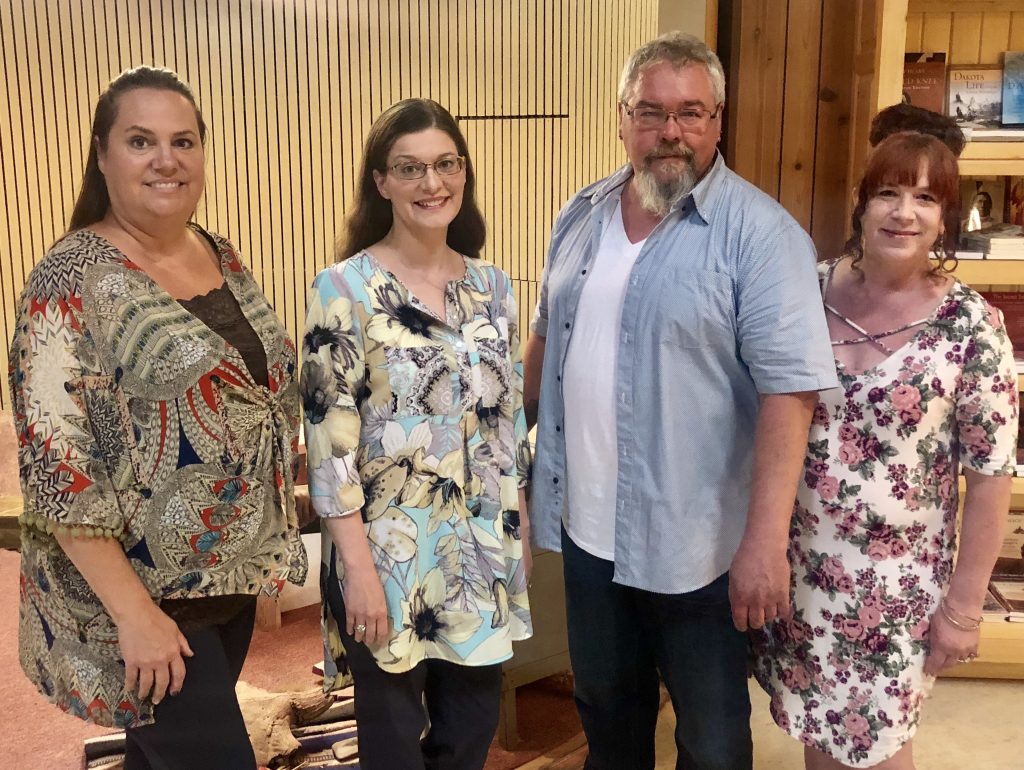 For those that are not familiar with the medium, Myron Koets, mayor of Pipestone, explains, “the process requires that the pipe maker quarry the carving stock from under the hard Sioux quartzite stone, which can vary in depth of five to fifteen feet above the soft red stone, by hand, as no automated or power tools are allowed. Once the soft red stone is uncovered, Travis begins the slow and tedious process of turning a raw piece of stone into a traditional pipe…his dedication to this art form is not only reflected in his longevity, but to the amount of hard physical work required of a traditional Native American pipe maker.” David Rambow, fellow artist as a wet plate photographer, further explains that in order to quarry effectively, Travis must possess both “the physical stamina and endurance of a construction worker in wielding a heavy sledge hammer against hard Sioux Quartzite to extract the pipestone. Once the pipestone is obtained, that brute force is exchanged for the technical artistry with which he carefully hand carves works of extreme delicacy from the soft pipestone.” Rambow adds, “Not many artists could balance this rare combination of talents.” Travis says that he believes quarrying and carving helps a person to look inside oneself. 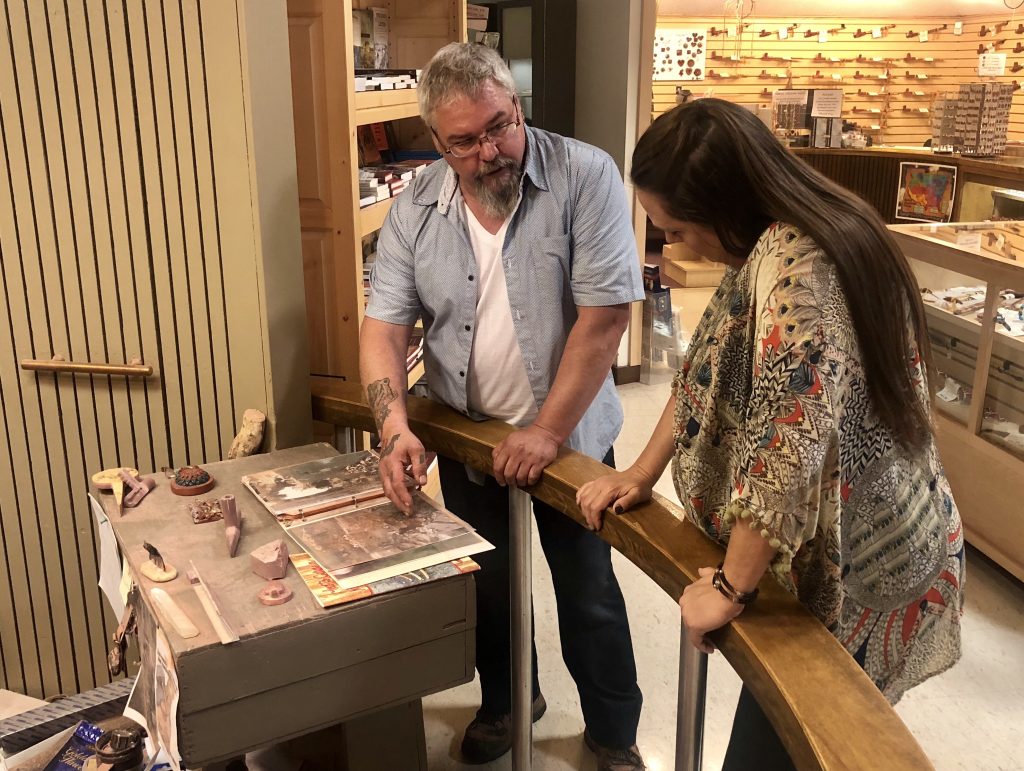 Travis and Nicole at the Pipestone National Monument in front of Travis’ cultural demonstrator booth, inside the visitor center.

Erica Volkir, Executive Director of the Pipestone Area Chamber of Commerce, nominated Travis for this award. Erica explained her reasons for nominating Travis:

Travis was born and raised in Pipestone and he remains here to this day, “this is his home and his art reflects that as seen in his choice of animals, plants, and Native American symbols associated with the region.” Even Travis’ medium comes from southwest Minnesota, “it is one of the most unique geological resources found in our area and he transforms it into art.” Travis has so much respect for the resource and medium he works with that he has even developed a new form of art from the pipestone that he refers to as Dust Art. Travis collects the dust that accumulates from carving and mixes it to create a “pipestone plastic”. Travis’ background of working at Bayliner Marine made him familiar with the chemistry to achieve his desired results. Erica explains, “this way, there is no waste and Travis truly uses all of the scared stone.” He creates jewelry and other objects by pouring the mixture into prepared molds, and removing the form once it hardens. He plans to sell his pieces around the town of Pipestone, at the Pipestone County Museum, the non-profit group Keepers of the Sacred Tradition of Pipemakers, and possibly the hospital gift shop and Liberty Pawn on Main Street. 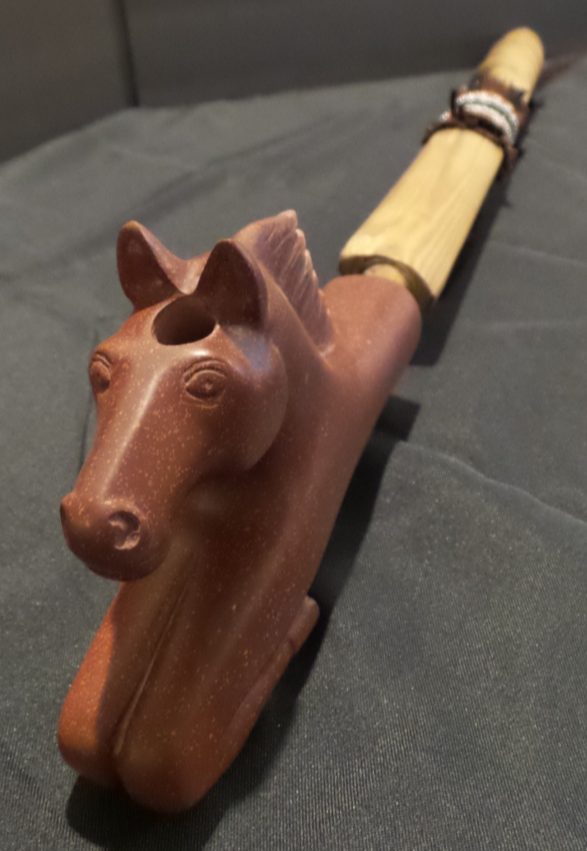 Erica continued with her reasons for Travis’ nomination, saying his “artwork represents a continuation and an elevation of a traditional art form associated with southwest Minnesota for thousands of years-pipestone carving.” Bud Johnston, a fellow carver, has worked with Travis for over 30 years; they have also worked together for The Keepers of the Sacred Tradition of Pipemakers. Bud said that Travis is “one of the few pipestone pipe makers that is truly an artist, he does a lot of custom one of a kind pipestone objects.” Travis said, “I explore and stretch my art through carving new animals all the time.” When asked what his favorite animal to carve is, he answered: “One I haven’t carved yet.”

Erica Volkir also says that Travis is an “ambassador for this region of his art form to more than 60,000 visitors a year through the Pipestone National Monument where he has been a Cultural and Artistic Demonstrator since 2000. He is concerned about cultivating the next generation of artists in his medium. Travis thinks beyond himself to do everything he can to ensure the longevity of this traditional art form.” He has mentored several quarry carvers, and even demonstrated for and taught Senator Amy Klobuchar to carve pipestone. He’s demonstrated countless times in Pipestone, but also at the National Eagle Center in Wabasha, MN, in Iowa at the Effigy Mounds National Monument, and even internationally in England at a museum in York! Myron Koets said, “What separates Travis from most other pipe makers is his desire to share his art from and to transfer the techniques of this art from to others. Almost daily, you are able to find him at the Pipestone National Monument conducting demonstrations as to how raw stone is converted to a pipe.”

Erica closed with, “And finally, in terms of his technical merit, Travis is often held up by his peers as THE standard of excellence. Not only has he mastered the traditional designs of his ancestors but his modern original works are admired and have received critical distinction.” Travis was commissioned by the Smithsonian National Museum of the American Indian in Washington, D.C. The Smithsonian also sent a film crew to Pipestone to interview him and make a 360 degree iMax film of Travis’ process. He was later featured in “Pipestone: An Unbroken Legacy”, an award winning documentary that is now featured daily at the Pipestone National Monument as their interpretive film. His pipes and other artwork have been commissioned and sold world-wide. Bud Johnston acknowledges his abilities by saying, “his skill is one of the best in the entire world.” David Rambow agrees, “I have never worked with a person who gives as much attention to detail and approaches  each project with as much enthusiasm as Travis does…[he] is by far the most talented living artist in the medium of pipestone carving.” When presented with the idea of being an artist with the highest quality of work, Travis said, “I never considered myself an artist although I have had people that call me a master of pipestone carving. I am seasoned by the enjoyment of creating something with my hands.”

David Rambow closed his letter of recommendation with this: “He loves people, works hard, and always tries to lift the spirits and talents of those around him. Additionally, he is a very humble and compassionate artist. Given his lifetime dedication to the extremely difficult and delicate form of art and the positive characteristics he represents from our region, I can think of no one more deserving of the Prairie Star Award.” After deliberating over many deserving nominations, the Southwest Minnesota Arts Council board of directors agreed, and we are honored to recognize Travis with this prestigious award. Travis’ reaction to receiving the award was “I’m still at WOW! I was never looking for the recognition. It makes you stop and think about how important your work is.” Travis’ words of advice were, “Keep exploring who you are!”

Please join our board, staff, members, and volunteers in honoring Travis Erickson for his contribution to the arts in southwestern Minnesota. The award will be officially presented to Travis at the SW MN Arts Council Annual Celebration on Saturday, September 29, 2018 at Off the Green restaurant and bar in Ortonville, MN. We hope to see you there to celebrate our region’s arts and artists with you! Watch our website for more information on the celebration! 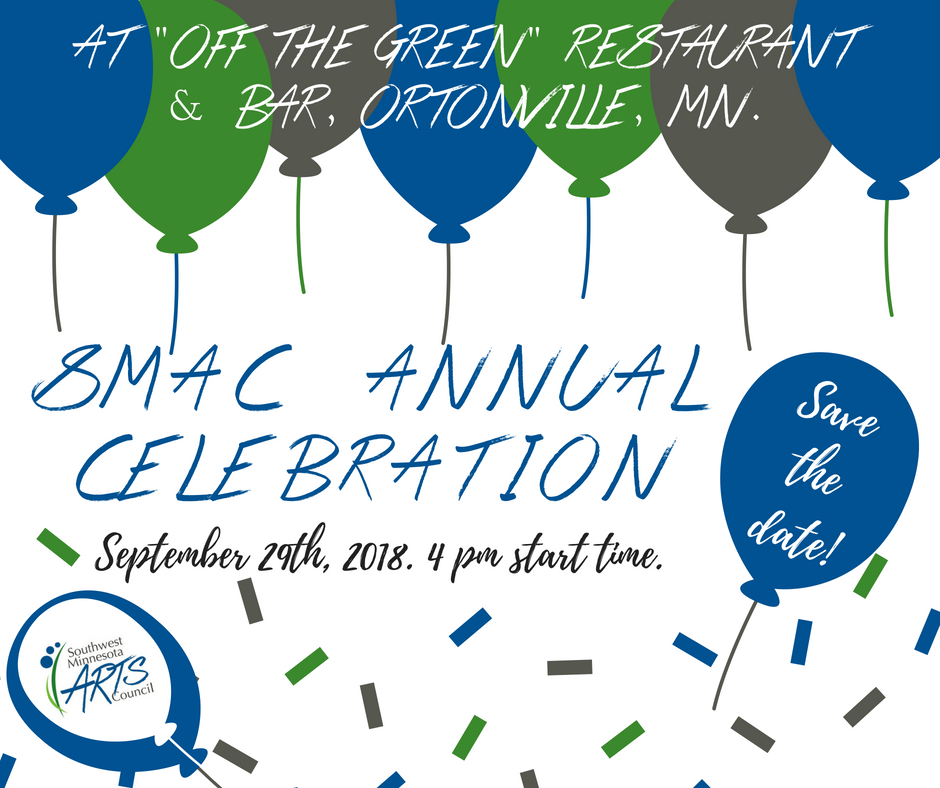 Check out the article about Travis Erickson in the Pipestone County Star!

More on the Prairie Star Award

Every other year, the Prairie Star Award ($5,000) recognizes an individual artist whose body of work has made a significant contribution to the arts over an extended period of time, who has been recognized by his or her artistic peers, and who has best exemplified the highest quality of work in the SMAC region.  In recognizing these individuals publicly, the awards will raise the profile of the arts in their communities and throughout the SMAC region.

Beginning in 2018, nominations must be submitted through our online grant system.
LOG IN to begin your nomination.

SMAC will next be accepting nominations in 2020.